Apologies for the lapse in communication, but there was good reason for it. After a crazy week at work, Brendan and I packed up and headed to sunny Southern California for a long weekend… We figured it would be a timely escape from the holiday stress and the Chicago cold (As it turns out, our plan was perfect, as Chicago got snow yesterday for the first time this winter). While we’re here until tomorrow, I wanted to check in to describe our first day in L.A.

On our first day, we woke up early and drove to Hollywood with my college roommate, who works out here and does ridiculous things like meeting with network and studio executives on Friday mornings. She dropped us deadbeats at the Roosevelt Hotel, where we had a phenomenal breakfast at the Twenty-Five Degrees bar. Afterwards, we wandered up and down Hollywood Boulevard, people-watching and snapping photos and reading the names on the Walk of Fame (which for some reason reminded me vaguely of a cemetery). We indulged our tourist status, shopped in the stores at Hollywood and Highland, and killed time until my roommate had wrapped up her too-cool meetings. She picked us back up and we headed west, stopping at Pinches Tacos across from the Chateau Marmont for our second meal of the day. (One theme of this and any trip we take is that there is an exorbitant amount of eating and drinking – I write this post from the terrace of our hotel, where we are currently having brunch).

Back in the car, we drove through Beverly Hills on our way back to the west side and the Getty Center in Brentwood (by far one of the most beautiful and interesting places I’ve ever been to, and the subject of future posts – wait for it!). We spent the rest of the afternoon there, watched the sunset, then headed back to her place for wine and takeout Thai. All in all, it was a solid first day in L.A.

Today – brunch, a drive to Santa Monica, a boat parade in Marina del Rey, and a holiday party at my friend’s beachside apartment. Fingers crossed we make our early flight home tomorrow, preferably with enough time for In-N-Out on the way to LAX…

Today I read an article about a scandal in the art world related to the concept of authenticity (read it yourself here).  My initial reaction was to think that it had all the makings of a fantastic novel – Thomas Crown Affair meets Sherlock Holmes.  I entertained visions of shifty exchanges in dark alleys, lavish lifestyles supported by false pretenses, private jets transporting forged masterpieces and an unfortunate collector swirling his brandy in front of his most recent acquisition.  It was all very Rene Russo and Pierce Brosnan to me, until I considered a deeper layer of meaning.

As a writer (well, and also as a human), I should think more often than I do about individuality.  So much of life is spent following trends or imitating so as to profit personally in some sort of way, be it financially, politically or socially.  More than that — I have always believed in the interconnectedness of life, that every new thing is influenced by what is around it or what came before it.  For those reasons, I assume that ingenuity is rare, but at the same time I sense that it is all around me if I only make an effort to see it.  It shows itself when an individual stays true to his or her interpretation of the world.

Getting back to the story at hand — I struggle to pass judgment on what is worse: imitating the masters and passing your work off as theirs, or stealing the design and passing it off as your own.  At times I’d say most of us are at risk of one or the other, when we lose sight of our own self-worth.  I value all of the people in my life whose actions or qualities assure me that originality is alive and kicking. 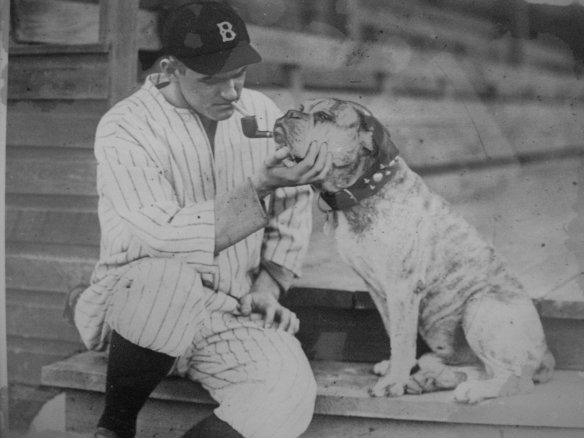 It is only fitting that Uncle Dutch makes an appearance here… Dutch Henry was my great-uncle, but we first became acquainted in the National Baseball Hall of Fame in Cooperstown, in the archives, where old photographs of baseball players live on forever. This was back in the good old days when a “family vacation” meant hours of sweating and melting crayons in the way-back of the powder blue station wagon, followed by an exorbitant amount of time spent on a remote Middle America campground, which of course led to terrifying encounters with wildlife, questionable plumbing, and neighbors with mullets and country music collections. Even back then, Uncle Dutch could sense my eagerness to see other worlds.

He followed me back home to Ohio, where he weathered the storm of my prepubescence, glancing over my shoulder as I scribbled furiously in wire-bound notebooks, writing cheap Little House on the Prairie knockoffs and fan letters to New Kids on the Block. He watched me through the dark days of high school when men’s corduroys and flannels seemed like perfectly good wardrobe choices, especially if accessorized with a seat in a coffeehouse. When I got my first boyfriend, he shook his head in dismay, shrugged his shoulders, and suggested that I might be better off focusing on college applications and straight A’s. He was in the first box that I packed to Baltimore.

There he is, in my college dorm room, enjoying prime real estate in the common area, beside a poster of France, a Kandinsky print, and a life-size cardboard cutout of Ricky Martin. The girls took to him naturally, toasting him regularly, and including him in the background of big-night-out pictures, when tube tops and black pants reigned supreme. The year I studied abroad, he tipped his hat to Customs and joined me in a cobblestoned Belgian town.

After graduation, Uncle Dutch felt the same unrest as I did about the prospects of a life without structure. Following a brief free fall, we headed to Michigan, using the pretense of a budding relationship. Uncle Dutch knew, even if I didn’t at the time, that this was a step away from my childhood, into the life of a grown-up, and the lesson was not one of love but of self-reliance and freedom.

A few years later, when Uncle Dutch saw the sparkle on the cityscape of Chicago, he knew we were finally getting somewhere. Did he imagine my initiation into Corporate America, my handsome Irish husband, my new fondness for sushi and my adorable puppy? Did he know all along that life is an evolution? Or did he feel us coming full-circle — to a place that holds terrifying encounters with wildlife, questionable plumbing, and neighbors with mullets and country music collections?

Whatever he may have known then, and still know now, and keep secret, here’s to you, Uncle Dutch, and to a life of new beginnings.

Life is fine! Fine as wine!

This blog is an exploration of life and wine – the people, places, and things that make a moment (and a bottle) memorable.

These Wines Are Fine

Tweets About Life and Wine