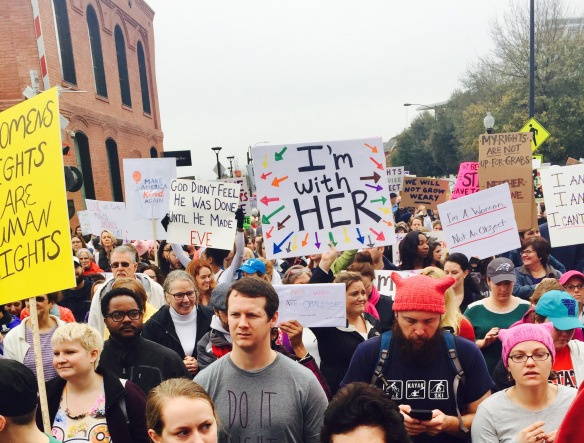 For me, this wasn’t at all about a man.

It was a text I received from a friend, inspiring me to take part.  It was the friend of that friend who drove me there and another who gave me a sign.  It was her five year-old daughter, skipping along our route, collecting flowers and feathers.

It was my college roommates in New York and DC who walked with parents, aunts, husbands, and children.  It was coworkers displaying signs proudly in Denver, San Francisco and Chicago.  It was women in my hometown marching with confidence across the city of Cleveland.  It was encouraging messages from those who were there in spirit, expressing love and support.

I watched strangers make room for one another in crowded parks and streets.  Young girls helping older women climb over curbs and steps.  The stately retiree in cashmere beside the lip-pierced student in neon beside the thirtysomething mom in ponytail and fleece, pushing a stroller or wagon.

In its usual way, history will paint the Women’s March as being all about a man.  But at least for me, its meaning was so much more significant.  It was about millions of women uniting in their shared experiences as mothers, daughters, sisters, friends, neighbors, colleagues, and citizens, empowering one another to see and be seen, to hear and be heard.

Life is fine! Fine as wine!

This blog is an exploration of life and wine – the people, places, and things that make a moment (and a bottle) memorable.

These Wines Are Fine

Tweets About Life and Wine